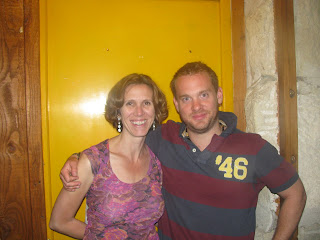 Quentin Collins – Fabulous trumpet player. He’s a great teacher, and gave me some tools that I really think I can apply this year to my practicing. He also played with me on my “Egg, Chips (and Beans)” and I’m still kicking myself that I didn’t get it on tape, because his solo was off the charts! 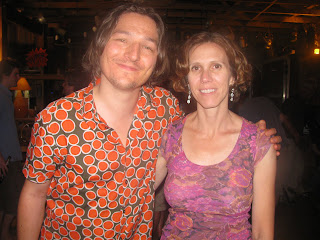 Jonathan Bratoeff – Very sensitive French guitarist. One of my favorite moments was a rehearsal with Jonathan. We were going over a couple of my tunes that we decided to play as duets for my Monday seminar. I was worried that I couldn’t pull it off without a bass player and drummer, but Jonathan assured me that everything would be fine. These I did record and his sensitivity and sensibility are amazing. The patterns that he comes up with are so distinctively him, and when you watch him play, you know you are watching the real deal. He is always completely involved in his performance. 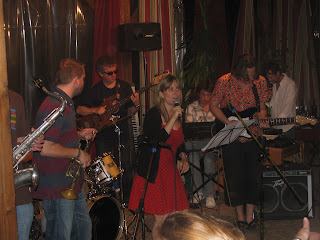 Dorian Lockett – Brilliant bass player and always jolly director of DJSS, along with his wife, Andrea Vicari. We were thrilled to have Dorian join my Composers Group on week one. He really helped us “find our groove” for our Friday night performance.

Andrea Vicari – Andrea makes playing jazz piano look so easy. She led the piano classes for week one, and also led my large ensemble for part of week two. Andrea’s assignment to us was to write down every note and rhythm of a sax solo from a 1940’s recording. She used a program called Transcribe, which made it possible to slow down the notes without distorting the tones. I had heard that transcribing solos was an important part of daily jazz practice, but I never could stick with it. Doing it as a group, a little at a time, made what seemed like an impossible task, possible. 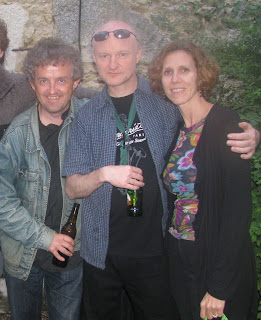 Mornington Lockett – I had the opportunity to work with this highly regarded sax player one day last year. This year, he was around for the full second week, dividing his time between the two large ensembles. His patience and attention to detail astounds me. On one particular tune, I was having trouble figuring out good piano voicings for the chord progression. So Mornington played some examples at the piano and said “Do you have it?” I was embarrassed to say no, I don’t. Watching someone’s fingers when they are moving too fast and trying to memorize their movements was a little over my head. Rather than give up on me, Mornington said “Sit down beside me and write down what I am doing.” That I could do! Mornington joined a group of us on my “B-3 Blues” and brought the house down with his stunning solo!

And thanks to Mark Lockheart, Nic France and Dave Gelly, who joined me on “Monteton Blues” and “Is This the Real Thing?” It was great working with all of the fine tutors!
Posted by Unknown at 9:19 AM