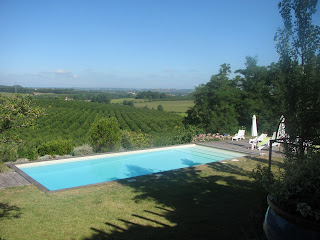 There were so many stories to tell when I arrived home. Stories about the people I love, and stories about the not so perfect moments in Monteton. My friends were wondering why I yearn to go to this place, where I don’t get enough sleep, where I make a lot of mistakes on stage, where travel to and from can be quite stressful, and where the unexpected can happen more often than the expected?

To me, a real good story, or a read good movie or play, shows the depth of the characters through both their goodness and their dark sides. When I write music, I try to access both of these qualities from myself or the world around me to make a musical story that has real emotion and depth.

Living with a group of people, some of whom I’ve known now for three summers, you begin to see the fullness of their character. You hear them groan and complain. You get to know their quirks and habits. You also see their generosity in bigger ways than you might have known before.

Several of us were very tired on Friday afternoon of our final day there. We had rehearsed at least 10 numbers throughout the day. We finally had a break, and really needed it to gear up for our big concert that night, which would start at 9 and last until at least 1:00 a.m. It was 4:15, and we were ready to run out the door and jump in the pool, on one of the few warm days we had that week. Lesley walked in and asked us to try one more piece. The chords weren’t all named yet, and it was a difficult tune. I worked on analyzing the chords, and Alan quietly stood behind me and wrote them down for his part. I was so impressed with everyone in that moment. After 30 minutes, though, Guy piped up, saying he needed a break. You’ve never seen two people find their swimsuits faster than we did.

When I am in Monteton, I feel like I am in a fairy tale. I am Thumbelina, and the sparrow has flown me in to find people just like me. (Except that we are full grown, not the size of a thumb.) Now, you all know what happens in fairy tales, right? Everything doesn’t go perfectly, but there is a happy ending, and the characters grow and learn from their experiences. I am with people like me, who love to learn, who love music, who don’t mind the pain one has to endure in order for growth to occur. Who love and accept each other, foibles and all.

Speaking of fairy tales, during the first week I was asked to join a group on stage who were jamming on the tune “Someday My Prince Will Come.” I tried to say yes every time I was asked, because that’s the best way to learn. I didn’t realize that several others had said no, because the chord changes in the piece are very difficult. I thought that since I know the melody and can easily sing it, it couldn’t be too hard. It was too hard. I played so many wrong notes, that I finally had to give up, and just sit on stage and listen, so that I wouldn’t ruin it for everyone else. The second week, someone asked me to play it again. Guess what I said? If you guessed no, you don’t win the point. (Remember, earlier in the paragraph, I said that I try to say yes every time I’m asked?) Amazingly, the second time was far better that the first. Somehow, I knew all the changes, and felt comfortable with the piece. I love happy endings!!

Leaving Monteton is never a happy ending, though. Can’t we have a little more time in this place, this Utopia, where you are served three wonderful meals a day that you don’t have to cook, and you get to enjoy long conversations at mealtime with people from all over the world who are just like you? Can’t we practice those tunes just a few more times, and improve our performances? Can’t I have just a few more walks around Monteton, so that I will never forget the expansive and breathtaking views of the countryside?