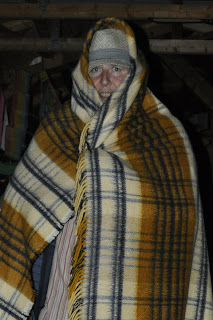 I only call him Big Dave because he calls himself Big Dave (and to distinguish him from the other Dave.) I don’t know if it is because he is Irish or what, but he is the funniest storyteller I know. If there was an empty spot beside him at the table, I often tried to fill it, just to enjoy more laughs and firm up my stomach muscles. At 6 feet, 8 or so inches, his stature meets his personality, and his nickname sums it up.

For Dave, I wrote a jazz arrangement of Danny Boy, which he requested. We had the opportunity to perform it together during the first week, and received lots of “awwwws” from the audience.

I want to tell the story that he told, but I don’t know if it will work coming from me. You really need to hear him tell it. So I’ll just give an outline. He said that he was staying at a bed and breakfast (I’m thinking it was owned by a family friend) and that he was promised the room with the big bed. When he left the room to find the bathroom, he came back and saw that someone else was in his bed. (He had actually walked into the wrong room.) Rather than double check, he grabbed the person by the feet and started shaking them and telling them to get out of his bed. The woman that he grabbed sat up, took off her eyemask, and started screaming that a “monster” was in her room. Dave realized his mistake and left the room. The woman ran out of the hotel in the middle of the night without paying.

If that woman only knew how wrong she was about Dave. He is a sensitive and soft-hearted guy, in a big and tall man’s body.
Posted by Unknown at 10:21 AM