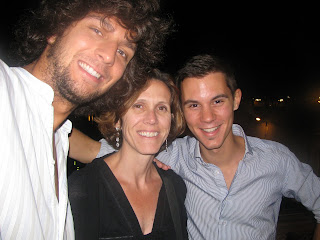 Ok, these guys were not on the jazz course. They are a couple of young men that I met in Paris last Sunday. On rue Mouffetard, at the restaurant where Ernest Hemingway used to live, I sat outside to eat dinner on a warm night. Two college-age guys were then seated at the table beside me I thought they were speaking French, and then it sounded like Spanish, so I was a bit confused and decided to ask them if they were French or Spanish. Guillaume was French and Piero was Italian. But Piero doesn’t speak French, so they converse in Spanish to each other (they met during their semester in Barcelona.) When Guillaume said “I’m French,” he said it so “English-ly” that I commented on his good English. Pretty soon we were all talking in English (thankfully) about important things like food and cheese and music and history. The hours flew by, and when Piero said it was midnight, my jaw dropped. During the conversation, they offered to join me at the jazz club I was planning to attend, but by the time we arrived, the jam session was over.

Lovely, lovely new friends, wise beyond their years. I loved how intensely each of them talked about their passions (especially food.) Guillaume gets angry when people don’t bond with their food like the French and the Italians do. Piero talked in detail about making homemade pasta, and about his village where, if you are a visitor, your plate is never empty. They both listened intently when I talked and responded to every thought I had. 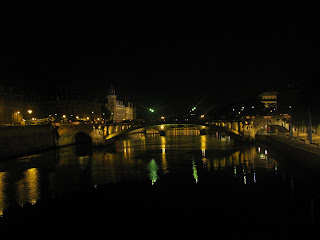 They walked me to my hotel after missing out on the concert. As we were crossing the Seine, we stopped for a photo opportunity. The sky was dark, but the lights across the water made it look like ice and it was so beautiful. Both guys were majoring in European languages, and I wished I could have stayed and learned a few more phrases from them!
Posted by Unknown at 11:01 AM