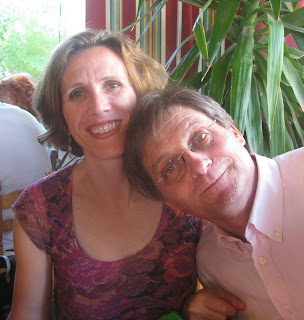 My purpose in traveling to the Dordogne Jazz School for the first time in July of 2008 was twofold – to learn to play jazz and to learn to write a jazz chart. I also hoped to make friends, but with my mission guiding me, I found myself avoiding the social life at night and instead going to a practice room alone to toy with chords and scales and voicings. Somehow, by the end of the week, I had bonded with people (thanks to the lengthy communal meals and rehearsal times.) Using the word bonded is putting it lightly. I had fallen head over heels in love with the 65 or so people enrolled in the course, from John, an 18-year-old from England who sat with me at the piano and helped me with my thirds and sevenths, to Reggie, a drummer who I believe was 82 that year. And I had fallen in love with the village itself, Monteton, and the surrounding countryside. By the end of the week, I realized that the person I was going to miss the most was a fellow named Guy, who was the drummer in my performance group. We seemed to always gravitate to the same table at meals, so we got to know each other gradually throughout the week. Plus, he was so wonderful to work with at the rehearsals. I managed to finish the piece I was trying to write that week (titled "Midnight at Monteton," subtitled "It's Silly, Really, But It's Love") and Guy was one of the musicians who performed it with me. He did a valiant job of staying in touch through emails, listening and commenting on each new piece I wrote (almost immediately after they were written) and we were able to perform together both in 2009 and this year.

Mornington, one of the tutors, describes Guy at the “quintessential Englishman,” which he is. Such a kind and thoughtful gentleman, he always saved me a spot at dinner, and always offered me a drink after our nightly performances. What catches me off guard is his offbeat humor. I laugh every time I think of the off the wall things that he comes up with. I also can’t help but like the fact that he loves my music and was willing to play drums with me on as many performances of my tunes as possible. I don’t have to say a word, he instinctively knows what style of hitting those drums I am looking for, even when I don’t know myself. We are such good buddies, it just didn’t seem right to have to say good-bye to him when the week was over. Especially since we ran out of chances for me to demolish him in ping-pong.
Posted by Unknown at 9:11 AM