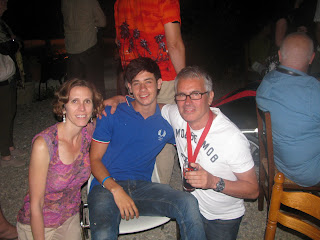 I’m forever grateful when friends, whether they know it or not, say something that sets off a desire in me to “write a song about it.” That’s what happened when John Paul Yardley sent me an email with the subject, “Egg, Chips (and Beans).” John was in my composers group at DJSS last year, along with Andy (who John actually addressed the email to.) In our group, we talked about our favorite foods, and as we talked, we listened to the rhythms we used when talking about something we love (which led us to some interesting improvisations.) Andy, from UK, but now living in France, said he missed having egg and chips for breakfast. So John sent an email (copied to me) with photos of Andy’s favorite food, prepared in John’s very own kitchen. I was so touched. I just had to write a song about it. My idea was to hide an “egg” in the tune. In my initial sketch, I started a tune with E-G-G, but that wasn’t working. So I kept playing with it and shifting and erasing and starting over. When I finally found something satisfying and excitedly created the chart, I realized the “egg” was missing. But it was too late, I really liked the tune. Then, when transposing to B flat for John’s sax, I found it, the missing egg!

John was here for the first week this year, and I hoped that he would want to perform Egg, Chips (and Beans) with me. We kept putting it off, and then decided to write it on the play list for Thursday night. So off to the practice room we went. He was not happy about the unexpected chord progression I wrote in bar 10. He was not happy about the extra flats in his part. I was afraid he might give up on the piece. We went through some sections, and then he asked me to leave so he could work on it alone.

About fifteen minutes later, he was ready. Joining us was Quentin on trumpet, Lesley on sax, Dorian on bass, Jack (John’s son) on drums and Leo on ukulele. We went on stage and Quentin counted us off. We played fast and furiously. It was fantastic. Everyone rose to the occasion. The crowded roared with delight. Later I realized I hadn’t set up my recorder. But my memory of the moment will stay with me.

John wasn’t able to stay for the second week, but that’s when Andy came (the one who John had sent the email to.) A group of us played the piece again at the final Friday night concert. This time it was Ollie and Lesley on sax, Guy on drums, Alan on bass, and Mike on guitar. Again, everyone played great, another wonderful moment. Andy was thrilled. (And I have it on tape!)
Posted by Unknown at 10:04 AM