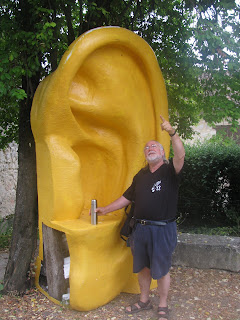 Sweet is not the word for Stuart. Sour is not the word for Stuart. Lesley (one of my roommates) called him rogue-ish – I think that will work for now. Abundantly generous could be another phrase. He is always bringing something new to the table – literally. A jar of preserves and a bag of fresh croissants and bread for breakfast, a jar of olives at lunch, and for dinner, the incongruent bottles of champagne and ketchup. Stuart, from Wales, often says the wrong thing at the wrong time, but I am able to forgive him because of the kind “right” things he has said to me over the years.

He took me aside last year, after the first meeting of my Composers Group. Just when I thought he was going to say I was the worst teacher in the world, he said that he understood what I was trying to accomplish, and he was 100% behind me. He proved this by taking on the role of sergeant-of-arms during the rest of the week. He’s not afraid to say anything, and sometimes, what he says is actually quite kind. A great trumpet player, I was happy to have him back in my Composers Group again this year. I will remember him having a bit too much to drink and standing and singing around the campfire to a rapt audience of French singers that we shared the chateau with during week 2.
Posted by Unknown at 9:56 AM