When people ask me about my favorite moment in Monteton, it is very difficult to choose.  There are so many that I have jotted down.  I’ll just start talking about one of them, and we’ll see where it goes. 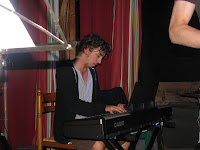 I asked Steve, one of the piano tutors, if he would consider performing one of my tunes.  “I Digress,” was so difficult in every way, between the complex chords and the off-kilter form and the rhythm, that I had trouble playing it once the head was over and it was time for comping and soloing.  I really enjoy his playing and wanted to hear his take on it.  He said yes, and helped me gather up some of the other tutors (Ian, Jonathan, Ferg and Nic) to run through it on stage. 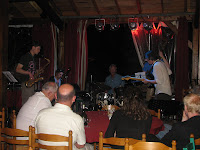 I was in the front row, on the edge of my seat.  The performance was nothing short of electric, amazing, astounding. Maybe because of the difficulty, each musician was fully engaged in the moment.  If there had been a video camera on me, you would have seen big bright eyes and a huge smile throughout.  I probably made the loudest “woo-hoos!” when they finished.  The guys came off stage, and said “That was hard!”  But they also said that they loved it. 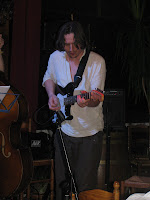 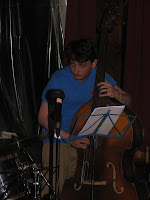 Jonathan, the guitar teacher who I have great respect for, and who played most of my new tunes throughout the week, gave me some wonderful compliments that will keep me going for a long time.  “You are a great jazz composer.  Where are you coming up with these ideas?  This one is so modern!  Who are you listening to??”
I had been working on the piece for two years.  Twenty-two measures, and it took me that long to figure out?  The original idea pretty much came to me all at once, on an August day in 2009.  It was the naming of the chords, the understanding of the bass line I had in mind, and the confusion about how to perform it that kept me from showing it to anyone. 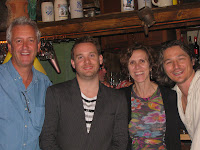 The moments after that performance were surreal.  It was like I had made the final touchdown and won the game, and was being hoisted up on the teams’ shoulders to a cheering crowd.  Except that it wasn’t really like that.  No one actually picked me up.  The next piece on the list was already in progress, and the audience had moved on to listen and cheer for the other players. It was just one of those times when you felt like it was all worth it.
Posted by Unknown at 8:57 AM